Prior to August 1, 2018 when the National Science Foundation (NSF) announced that WHOI would operate a new center, OBSIP had provided seafloor seismographs and technical support to the U.S. academic community since 1999.  WHOI has also played an important role in OBS science since the mid-1970s.

The Ocean Bottom Seismograph Instrument Pool - “OBSIP” was established in 1999 as a National Science Foundation (NSF) instrument facility that provided ocean bottom seismometers to support research and further our understanding of marine geology, seismology and geodynamics.

OBSIP was funded by the NSF and composed of a Management Office (IRIS) and three Institutional Instrument Contributors - Lamont Doherty Earth Observatory (LDEO), Scripps Institution of Oceanography (SIO), and Woods Hole Oceanographic Institution (WHOI), each of whom contributed both instruments and technical support to the pool.

The evolution of ocean-bottom seismography at WHOI began long before the establishment of a formal instrument lab at the Institution and has been marked by steady improvements leading to sophisticated instruments in wide use today. From 1976, with the development of an analog ocean-bottom hydrophone, 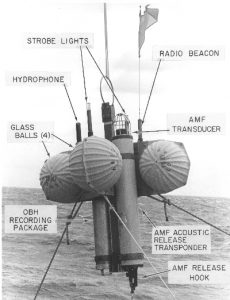 and continuing to today with the development of modern instrumentation, WHOI has maintained an unbroken chain of engineers handing down knowledge from generation to generation and building on the advancements of their predecessors.

In 1999, WHOI was a founding member of the OBS Instrument Pool (OBSIP), formed to provide the marine geology, seismology, and geophysical research community with instrumentation, engineering, and at-sea support. Today, WHOI engineers continue to provide unparalleled technical knowledge to researchers and students who are actively engaged in exploring the depths of the ocean and the Earth.  LEARN MORE